The composition of this work alludes to elements visible in Dutch landscape painting of the 1730's and 1740's, for example Henderson says, "I have utilised its depth of chiaroscuro and exaggerated rolling skies producing a quiet dynamism in the picture plain. The clouds are at once amorphous and an-amorphous, creating fertile play between the abstract and representational, the ambiguity of form perhaps containing an embryo, the curve of a breast or swimming sperm" . . . . . To state the obvious these paintings are not careful delineations of picturesque landscape, they are essentially emotional and concerned with ideas about the nature of art &intended to stimulate and provoke rather than reassure.
-Ted Hickey, Keeper of Art, Ulster Museum, 1986

Henderson makes full use of the art of quotations; his images deliberately provoke 18th Century landscape conventions, as well as the Expressionist subjectivity of Jack B. Yeats. The painting’s titles bear the burden of differentiation. For instance, ‘A painting about to become a landscape or a landscape about to become a painting’ makes a neat conceptual point about the relationship between images and reality. . . . In this case a mode that is self-conscious, clever and ironic.
-The Sunday Independent, John Hutchinson Director of the Douglas Hyde Gallery, Trinity College Dublin, 1987

It is very much in the grand manner, it is very reminiscent of the kind of energy you find in Turner for example, it is not sweet art for office walls by any means, it's a very engaging series of landscape paintings, with its very rich subtle colour range the skies are obviously attractive full of energy, full of bravura and gestural painterly work. It's an exciting exhibition . . . . . read the complete interview & review
-Liam Kelly, BBC Radio NI, Transcript, 1987
​He is comfortable with paint and manipulates it with ease and panache, he handles scale convincingly. When he gets involved in atmospheric effects for their own sake, the paintings really begin to breathe. The works on paper have an unmediated, forceful, brooding presence, a sense of sheer reality that the whimsy of the oil paintings set out to deny. . . . . He is a painter of considerable talent and some achievement.
-Sunday Tribune, Aiden Dunne, 1987

The technique is to make you feel as if you were inside the landscapes. You look down upon them but they stretch to no great distance in from of you. Above the opera curtain of cloud seems to weigh down upon you, cutting off the view, foreshortening, inducing claustrophobia so that you have to physically turn your head from side to side to become aware of the breadth of the landscape. The paradox of these paper works is that the psychological thrust works best when you are up close . . . . the effect is markedly powerful.
-Brian McAvera, Irish News, 1987

He has lived in London and worked in almost complete isolation, retaining the vision of his native land in a body of poignant but never sentimental work . . .  He has grafted a particular wit and detachment which informs his work with a singular personality.His work, indeed his life . . . . . His later paintings express a peculiarly Irish combination of deep feeling for the countryside and a sense of restlessness; the emigre looking back from a sadder world . . . . . .  His vision comprehends lush and subtle tumultuous panoramas and skyscapes as well as grim depictions of the Border Country that echo, without ever stating, the landscapes of the war artists such as Paul Nash . . . . . reflecting the ambiguity of that beautiful but troubled province.
-David Edwards, University College London, 1989

Powerful landscapes, coruscating visions, unmistakably Irish they glow with colour and are imbued with the spirit of his native land.
-Ian Gale, Sunday Independent, 1994 ​

In reference to the painting 'If Hobbema Has Seen Ireland'; The title of this work refers to the Dutch painter Meindert Hobbema (1638-1709), and the painting's low horizon line and large expanse of sky evoke the picturesque and romantic conventions of 17th century Dutch landscape painting. While Henderson was inspired by the Fermanagh landscape, he depicts a mood rather than any identifiable place. The dark foreground beneath a mass of clouds and the light on the trees and the water's edge create a sense of unease. Henderson's approach is essentially emotional and this work, while conveying the spirit of the landscape of Ireland, is like all his paintings, intended to stimulate and provoke the viewer, rather than to reassure.
​-Helen Lanigan-Wood, Museum Curator, Art UK Review, 2004

​The bulk of Jeremy’s art, at first glance, appears mostly to be hazy landscapes. It is upon observing them a bit longer that the viewer comes to understand the depths of his vision. Emotions, mood, thoughts and doubts flood the scenes he depicts; they become the scenes themselves. Henderson’s work evolved into an exploration of abstract representation – not quite real and not quite unreal imagery.
-Jeff Mitchell, Odd Nuggets, 2017 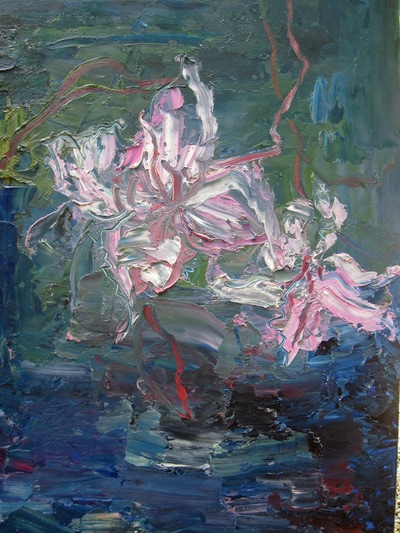 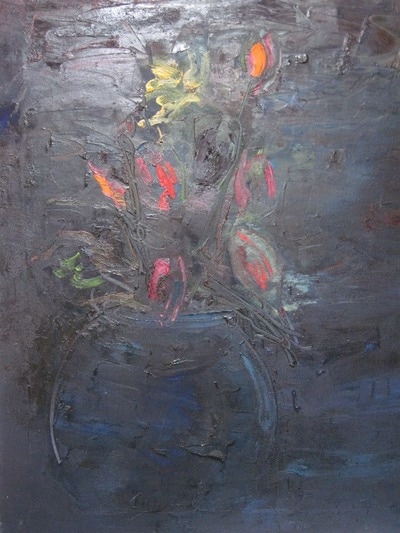 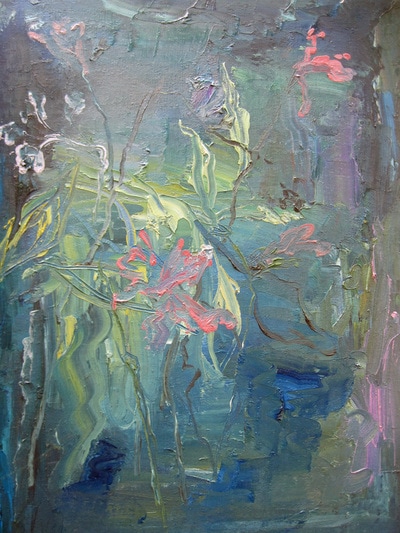 The real memory of that time was Jeremy's optimism and support, even though he was living on the fresh air that whistled through the building, he invariably saw the possibilities of any situation. His whole focus was his paintings, the ideas that we were developing and the ambition with which he expressed them.
-David Fusco, Sculptor, statement about 1990’s

I first met Jeremy in 1976 when  where we were both studying Fine Art at Kingston-Upon-Thames Polytechnic (It became a University much later). He was a third year student when I got to know him.   I was a second year. As second year students we could all see the quality in his work even then. We were on the first floor studios of the Knights Park campus. It was not until the 1990's that I met up with Jeremy again and along with a Sculptor friend David Fusco  we jointly  rented a 1000 square feet of studio space in Brick Lane London. It was the Old Truman's Brewery site. . . . Jeremy had 500 square metres and my self and David had 250 each. I remember these has happy times, having three artists together,  days were spent discussing art issues of the day and giving each other encouragement in  times of doubt. . . . . .

. . . . . I particularly remember coming in of a morning and hearing Jeremy's jazz records playing and the strong smell of welcoming coffee. There were sad times when Jeremy's relationship with his partner broke down. He had no where to stay except in his studio space. This became a problem as winter set in and it was impossible to heat such a large studio space. The solution was a large tent. I remembered my parents had an old six person tent which served us well on many happy holidays as a child. It looked splendid pitched inside the studio , Jeremy decked it out in colourful fabrics, a cosy bed and table, it proved a warm and comfortable environment that saw Jeremy through several cold winters. . . . .

. . . . . Although tough times it was surreal moments like these sitting outside Jeremy's pitched tent in the studio sharing a cup of coffee, laughing and chatting that made life better . One source of conversation  was about the mice that scratched around the studio at night outside his tent and kept him awake.  It was one morning as we drank our coffee we watched a tiny mouse spiral its way up the cord of the kettle to get get to the work surface that Jeremy had built as his kitchen area. It was moments like these that lightened the spirits. . . . . . Every Summer the studios in the east end became part of the open studios programme. This enabled the public to visit and buy work from the studios and more hopefully catch the eye of a passing art critic or two. I will always have fond memories of Jeremy.   It was such a tragedy he died so young. He was an intelligent and incredibly accomplished Painter.
-Bryan Benge, Artist, statement about 1990’s

“Jeremy showed me some of his work in his modest, understated manner. There was a 5’ x 5’ painting called ‘In Ireland, History Often seeps Through’, an Irish landscape which was tinged with red. For the first time I suddenly understood art. I realised that up until then I had been collecting names but not art”.
-Randal Faulkner, Private Art Collector, 1995

I was at Kingston Poly when Jeremy did his Picker fellowship. I live in France and teach English at the University in Tours but still paint. The work I saw of Jeremy's then and at Chelsea was the best modern Art I've seen to this day. I don't know if pictures exist of that period. I don't know if he was married or had kids to pass this message of respect onto. I often think of his work.
-Timothy Axworthy, Tutor, Loches, France, 2009

Jeremy elected to be painter at time when paint had become a complex and challenging medium, because of the plethora of different artistic styles, fashions and influences of the 1970's and 1980's. Throughout his life he was steadfast in charting his own journey through making paintings as a truly contemporary activity, weaving together abstraction and representation into a powerful personal vision. Eventually, the artistic canon will review the ‘persistence of painting’ and Jeremy’s contribution will take its rightful place.
-Liz Lydiate, Creative Intelligence, 2017

I knew Jeremy for several years, and from my time living in Fermanagh. Jeremy was a contemplative, a loner, a technician and a very fine artist. His paintings prompt us to see into the life of things, to feel a sense of being; it was through his mastery of technique and vision that he was able to involve the viewer in his inscape. His paintings of the Fermanagh landscape capture the energy of the terrain, his juxtaposition of colours and tones, warm and cold, give a shimmering effect, a landscape in a state of flux, a land of changing light.
Jeremy’s canvases are testament to the ability he possessed to create a sense of place, a world of the imagination, a mindscape formed on the plastic space of a canvas. He is sadly missed.
- Philip Flanagan, Painter & Sculptor, 2017
Top of the Page